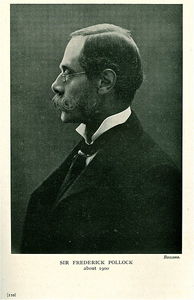 Sir Frederick Pollock (1845-1937) makes a distinction in his discussion of torts between doing justified and unjustified harm to others. Since playing football is a voluntary activity where the rules are agreed to in advance by the players, then what ostensibly looks like a violent assault on the field, or what he called “a confused fight of savages,” is just a tackle:

There are incidents, again, in every football match which an uninstructed observer might easily take for a confused fight of savages, and grave hurt sometimes ensues to one or more of the players. Yet, so long as the play is fairly conducted according to the rules agreed upon, there is no wrong and no cause of action. For the players have joined in the game of their own free will, and accepted its risks. Not that a man is bound to play football or any other rough game, but if he does he must abide its ordinary chances. Here the harm done, if not justified (for, though in a manner unavoidable, it was not in a legal sense necessary), is nevertheless excused.

As part of our series of quotations about football and liberty, we have a passage from the English legal historian and jurist Sir Frederick Polloack’s book on The Law of Torts (1895). He makes the interesting point that what might appear at first sight to be a violent assault on somebody’s rights (in other words that there is a perpetrator of a crime and the victim of a crime) is in fact what is nowadays called a “victimless crime”. In the example he so colourfully uses, that of violence committed during a football game (presumably “soccer” and not American football), all the players have voluntarily agreed to play the game according to a set of rules and that an inevitable part of the game is violent tackling. Therefore it follows from this that there can be no “victim” and no criminal “perpetrator” when all have voluntarily agreed to play the game. Thus, football might be seen to be a case of a “victimless crime”.