Étienne de la Boétie provides one of the earliest and clearest explanations of why the suffering majority obeys the minority who rule over them; it is an example of voluntary servitude (1576) 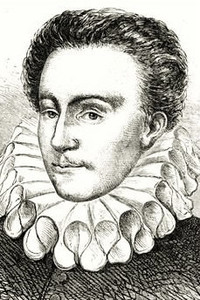 Found in The Discourse of Voluntary Servitude

La Boétie poses one of the thorniest problems in political philosophy: why the suffering majority obey the orders of the ruling few:

For the present I should like merely to understand how it happens that so many men, so many villages, so many cities, so many nations, sometimes suffer under a single tyrant who has no other power than the power they give him; who is able to harm them only to the extent to which they have the willingness to bear with him; who could do them absolutely no injury unless they preferred to put up with him rather than contradict him.[3] Surely a striking situation! Yet it is so common that one must grieve the more and wonder the less at the spectacle of a million men serving in wretchedness, their necks under the yoke, not constrained by a greater multitude than they, but simply, it would seem, delighted and charmed by the name of one man alone whose power they need not fear, for he is evidently the one person whose qualities they cannot admire because of his inhumanity and brutality toward them. A weakness characteristic of human kind is that we often have to obey force; we have to make concessions; we ourselves cannot always be the stronger. Therefore, when a nation is constrained by the fortune of war to serve a single clique, as happened when the city of Athens served the thirty Tyrants, one should not be amazed that the nation obeys, but simply be grieved by the situation; or rather, instead of being amazed or saddened, consider patiently the evil and look forward hopefully toward a happier future.

Boétie’s answer to this question is thoughtful and detailed. The country and system one is born under is accepted without question as normal; only a very few are born with the faculty to question the justice and necessity of the rule of the few; most are content to remain cowardly and submissive under tyranny; ordinary people are trained to adore their leaders; a select few who cooperate with the ruler are rewarded well for their services; others accept their servility because they wish to acquire wealth under the tyrant’s rule. In 1549 Boétie was content to “consider patiently the evil and look forward hopefully toward a happier future” when this would no longer be the case.