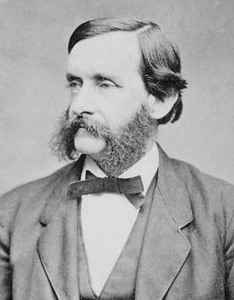 Thomas Wentworth Higginson (1823-1911) was a prolific author and editor who was active in Abolitionist circles before the Civil War. During the war he commanded an all-black regiment and wrote about his experiences after the war. At the end of the 19th century he was active in the Anti-Imperialist League in Boston which opposed American intervention in the Philippines.