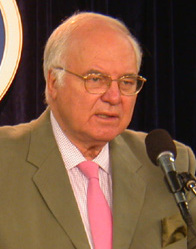 Michael Novak in the George Frederick Jewett Scholar in Religion and Public Policy and Director of Social and Political Studies at the American Enterprise Institute. Novak is the author of twenty-five books and over five hundred articles in the philosophy and theology of culture, including The Spirit of Democratic Capitalism (1982), for which he was awarded the Antony Fisher Prize by Margaret Thatcher. Novak has served as Ambassador of the U.S. Delegation to the U.N. Human Rights Commission and head of the U.S. Delegation to the Conference on Security and Cooperation in Europe.