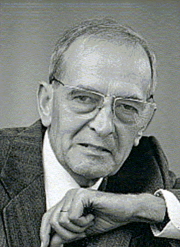 Jacques de Guenin is president of the Cercle Frédéric Bastiat which he founded in 1990. He is a graduate of the École des Mines in Paris and holds a Master of Sciences from the University of California, Berkeley, and has served as an executive in two multinational corporations. He is the author of Logiques du Libéralisme.

The General Editor of Liberty Fund’s Collected Works of Frédéric Bastiat, the French businessman Jacques de Guenin (1931-2015), passed away on Saturday October 24, 2015. The editor of the OLL, David M. Hart, reflects on Jacques’s contributions to the rediscovery of liberty on both sides of the Atlantic here.