The great charter of King John, granted June 15, a.d. 1215. John, by the Grace of God, King of England, Lord of Ireland, Duke of Normandy, Aquitaine, and Count of Anjou, to his Archbishops, Bishops, Abbots, Earls, Barons, Justiciaries, Foresters, Sheriffs, Governors, Officers, and to all Bailiffs, and his faithful subjects, greeting. Know ye, that we, in the presence of God, and for the salvation of our soul, and the souls of all our ancestors and heirs, and unto the honour of God and the advancement of Holy Church, and amendment of our Realm, by advice of our venerable Fathers, Stephen, Archbishop of Canterbury, Primate of all England and Cardinal of the Holy Roman Church; Henry, Archbishop of Dublin; William, of London; Peter, of Winchester; Jocelin, of Bath and Glastonbury; Hugh, of Lincoln; Walter, of Worcester; William, of Coventry; Benedict, of Rochester—Bishops: of Master Pandulph, Sub-Deacon and Familiar of our Lord the Pope; Brother Aymeric, Master of the Knights-Templar in England; and the noble Persons, William Marescall, Earl of Pembroke; William, Earl of Salisbury; William, Earl of Warren; William, Earl of Arundel; Alan de Galloway, Constable of Scotland; Warin FitzGerald, Peter FitzHerbert, and Hubert de Burgh, Seneschal of Poitou; Hugh de Neville, Matthew FitzHerbert, Thomas Basset, Alan Basset, Philip of Albiney, Robert de Roppell, John Mareschal, John FitzHugh, and others, our liegemen, have, in the first place, granted to God, and by this our present Charter confirmed, for us and our heirs for ever: 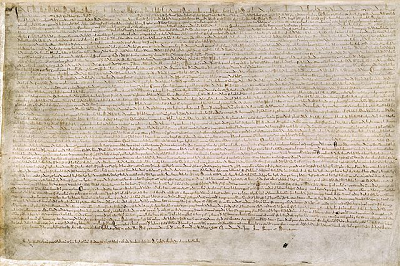