March 2022: Mary Wollstonecraft and the Rights of Women

Please join us in March, 2022 for Mary Wollstonecraft and the Rights of Women, with Janet Bufton. 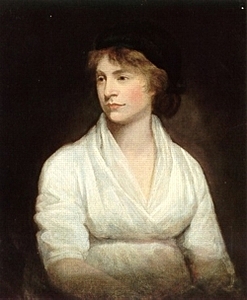 Pre-registration is required. Participants who successfully complete ALL sessions will be eligible to receive an Amazon e-gift certificate.

The sessions and readings are as follows, all from Wollstonecraft's A Vindication of the Rights of Woman.

Chapter 1: The rights and involved duties of mankind considered
Chapter 2: The prevailing opinion of a sexual character discussed
Chapter 3: The same subject continued
Chapter 4: Observations on the state of degradation to which woman is reduced by various causes

Chapter 5: Animadversions on some of the writers who have rendered women objects of pity, bordering on contempt
Chapter 6: The effect which an early association of ideas has upon the character
Chapter 7: Modesty--Comprehensively considered, and not as a sexual virtue
Chapter 8: Morality undermined by sexual notions of the importance of a good reputation

Chapter 9: Of the pernicious effects which arise from the unnatural distinctions established in society
Chapter 10: Parental affection
Chapter 11: Duty to parents
Chapter 12: On national education
Chapter 13: Some instances of the folly which the ignorance of women generates; with concluding reflections on the moral improvement that a revolution in female manners might naturally be expected to produce.