The Intellectual Portrait Series: A Conversation with Sir Alan Walters

Sir Alan Walters discusses his role in the transformation of the British economy during the 1980s as economic advisor to British Prime Minister Margaret Thatcher.

I-Which academic does Walters cite as having been pivotal in his interest in free market liberal ideas? How does this play into Walters’ view of liberty versus democracy in terms of their roles as basic building blocks of society?

II- A lot of Walters' work took place in the realm of public policy pricing. Explain the work he did on the public cost of using roads. Did any particular country use his suggestion of policy for road use? How did it turn out in that area? How did this influence his work on other public utility issues?

III- Walters later worked with American economist Milton Friedman, whose quantity of money theory this influenced Walters' view on monetarism. How does Walters explain the monetarist point of view? What examples does Walters use to discuss monetary versus fiscal policy, and what is he attempting to illustrate with each?

IV- Walter often debated with Friedman on the demand for money. Explain how Walters challenged Friedman specifically in 1965.

V- Why were the years Walters spent at the LSE so formidable?

VI- During the same time he was a professor at the LSE, Walters was also a part-time advisor for the Prime Minister of the UK, Edward Heath. What were some of the policies that Heath told Walters he was planning to pursue? What was Walters’ experience with Heath?

VII- How does Walters compare the Margaret Thatcher years to the Heath years? What aspect of Thatcher’s character pushed Walters to decide to advise her? To what extent was he optimistic about Thatcher? How did the economics community feel about him returning to political economic advising?

VIII- What was the defining moment for Walters’ optimism during the Thatcher years? How did the economists of the time feel about this particular victory of Walters alongside the two other advisors? What were the results of this policy?

IX- Why did Walters say he left his government advising role at the end of his two year contract with Heath? What famous quote does he use to reiterate his reasoning?

X- Who was Walters’ chief rival within the Thatcher cabinet? What was the issue that Walters and this minister quarreled over? What was the result of their quarrel?

XI- How does Walters view the policy decision from the question above? What was the effect of this policy on the conservative party?

47:30 Predictions for the Monetary Future

XII- Interviewer Blundell makes the statement that Walters has been quite good with predicting the future of economic issues. How does Walters see the future of the monetary union? How prescient would you consider his prediction on this today?

49:00 Relationships with the Great Economists

XIII- Who were the major economists Walter idealized, and why? 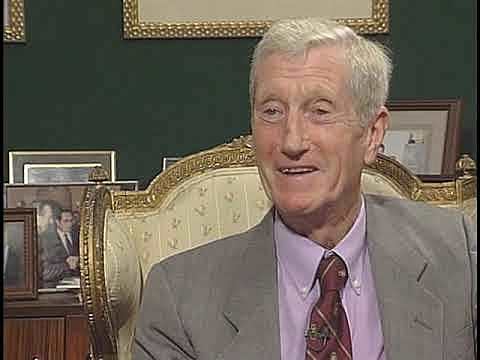