New Picture of Tocqueville in 1848

This lithograph of Alexis Charles Henri Clérel, comte de Tocqueville, better known as Alexis de Tocqueville, was created by Leon Noël in 1848. That year Tocqueville was elected to France’s Chamber of Deputies, and on September 12, 1848 he spoke against a government program guaranteeing employment at a set wage. Among other topics, he distinguished democracy from socialism. “Democracy and socialism are not interdependent concepts. They are not only different, but opposing philosophies. Is it consistent with democracy to institute the most meddlesome, all-encompassing and restrictive government, provided that it be publicly chosen and that it act in the name of the people? Would the result not be tyranny, under the guise of legitimate government and, by appropriating this legitimacy assuring to itself the power and omnipotence which it would otherwise assuredly lack? Democracy extends the sphere of personal independence; socialism confines it. Democracy values each man at his highest; socialism makes of each man an agent, an instrument, a number. Democracy and socialism have but one thing in common—equality. But note well the difference. Democracy aims at equality in liberty. Socialism desires equality in constraint and in servitude.” The entire speech is available here, which also features a later color portrait of Tocqueville painted by Theodore Chasseriau in 1850, and which is displayed in the Palace of Versailles. 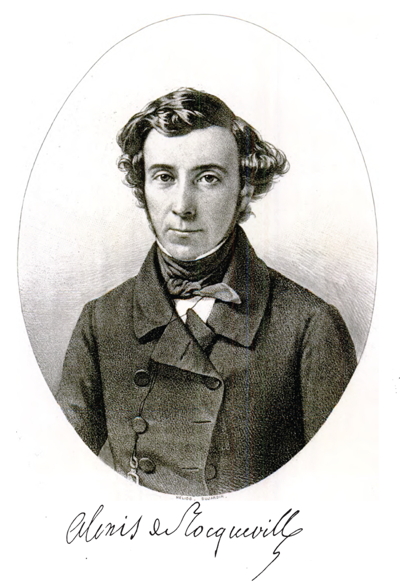