During the war years the Austrian-American free market economist Ludwig von Mises (1881-1973) wrote a number of books which criticised government intervention and control of the economy, especially price controls, rationing, policies of economic autarchy, the diversion of labor and other resources to war production, and the financing of the war through loans, confiscation, and inflation.

While Mises was living and working in the U.S. he would have seen the propaganda produced by the American government encouraging U.S. citizens to make sacrifices for the war effort, such as the use of "ration books" and price controls in order to allocate resources away from consumers and towards war industries, to seek work in "essential" war industries and the transport of munitions, and to forgo the use of certain products essential to the war effort such as fats and rubber. We reproduce some of these images here. 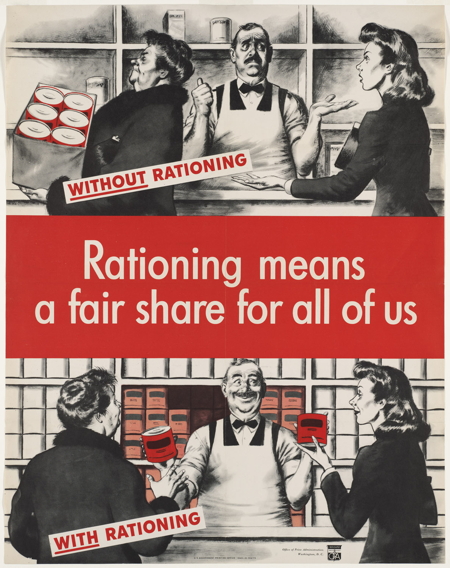 Herbert Roese, "Rationing means a fair share for all of us" (American Office of Price Administration, 1943)