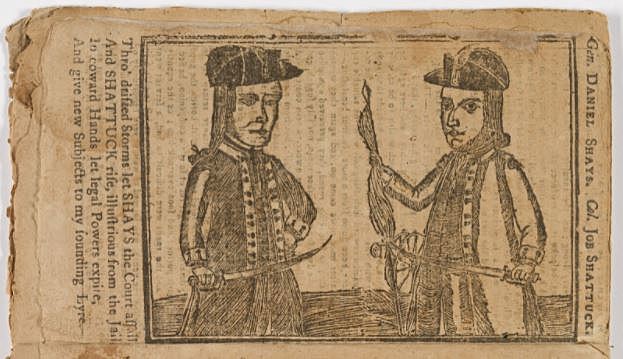 In 1786, the United States government was young in its development and still finding its way. The country was governed by the Articles of Confederation, its first constitution, which many felt wasn’t strong enough. Shays's Rebellion would end up proving their point.

After the American Revolutionary War, many citizens in Massachusetts were struggling to survive. The state was responsible for its share of the debt incurred from the war. Heavy taxes were levied on the people to pay for that war debt and to fund the new nation. Many of the citizens were farmers who had fought vigilantly in the war and had been paid very little or not all.

To pay the tax or any outstanding debts owed, tax collectors would seize property, farm animals, or anything of value. This created resentment among the people and a sense of “us versus the government” began to develop. Citizens were used to having extended credit or “bartering” to pay debts because there was a shortage of paper money in the country. With frustrations high this “new” tax caused hardship for the citizens of Massachusetts and of course, protest began.

The protests began peacefully. Residents submitted petitions with their grievances and potential reforms to the legislature. Unfortunately, the protests moved quickly to a more aggressive stance.

“Shays's Rebellion” (29 Aug 1786 - June 1787) was named after Daniel Shays, ex-soldier who became a rebel, not by choice, but some might say by fate. Shays served admirably and fought at Bunker Hill.

During the rebellion, courts were shut down in several locations and protestors planned an attack on the federal armory at Springfield, Massachusetts. The attack on the armory was not successful as militia General William Shepard was made aware of the plan and was waiting there with several thousand armed men. Many were killed and injured but more rebels were able to escape only to be hunted by General Benjamin Lincoln. This was the last run for the rebels who either sought refuge in New Hampshire and Vermont or were captured.

After the rebellion was over, amnesty was offered to the participants. About 4,000 people acknowledged their roles in the rebellion in exchange for amnesty. Several hundred were actually charged with crimes but were eventually pardoned.

The events of this rebellion lent strong ammunition to Federalists, like Alexander Hamilton, in the push for a more centralized government.