Galileo and the New Science

Source: Iintroduction to Dialogues Concerning Two New Sciences by Galileo Galilei. Translated from the Italian and Latin into English by Henry Crew and Alfonso de Salvio. With an Introduction by Antonio Favaro (New York: Macmillan, 1914).

WRITING to his faithful friend Elia Diodati, Galileo speaks of the “New Sciences” which he had in mind to print as being “superior to everything else of mine hitherto published”; elsewhere he says “they contain results which I consider the most important of all my studies”; and this opinion which he expressed concerning his own work has been confirmed by posterity: the “New Sciences” are, indeed, the masterpiece of Galileo who at the time when he made the above remarks had spent upon them more than thirty laborious years.

One who wishes to trace the history of this remarkable work will find that the great philosopher laid its foundations during the eighteen best years of his life—those which he spent at Padua. As we learn from his last scholar, Vincenzio Viviani, the numerous results at which Galileo had arrived while in this city, awakened intense admiration in the friends who had witnessed various experiments by means of which he was accustomed to investigate interesting questions in physics. Fra Paolo Sarpi exclaimed: To give us the Science of Motion, God and Nature have joined hands and created the intellect of Galileo. And when the “New Sciences” came from the press one of his foremost pupils, Paolo Aproino, wrote that the volume contained much which he had “already heard from his own lips” during student days at Padua.

Limiting ourselves to only the more important documents which might be cited in support of our statement, it will suffice to mention the letter, written to Guidobaldo del Monte on the 29th of November, 1602, concerning the descent of heavy bodies along the arcs of circles and the chords subtended by them; that to Sarpi, dated 16th of October, 1604, dealing with the free fall of heavy bodies; the letter to Antonio de’ Medici on the 11th of February, 1609, in which he states that he has “completed all the theorems and demonstrations pertaining to forces and resistances of beams of various lengths, thicknesses and shapes, proving that they are weaker at the middle than near the ends, that they can carry a greater load when that load is distributed throughout the length of the beam than when concentrated at one point, demonstrating also what shape should be given to a beam in order that it may have the same bending strength at every point,” and that he was now engaged “upon some questions dealing with the motion of projectiles”; and finally in the letter to Belisario Vinta, dated 7th of May, 1610, concerning his return from Padua to Florence, he enumerates various pieces of work which were still to be completed, mentioning explicitly three books on an entirely new science dealing with the theory of motion. Although at various times after the return to his native state he devoted considerable thought to the work which, even at that date, he had in mind as is shown by certain fragments which clearly belong to different periods of his life and which have, for the first time, been published in the National Edition; and although these studies were always uppermost in his thought it does not appear that he gave himself seriously to them until after the publication of the Dialogue and the completion of that trial which was rightly described as the disgrace of the century. In fact as late as October, 1630, he barely mentions to Aggiunti his discoveries in the theory of motion, and only two years later, in a letter to Marsili concerning the motion of projectiles, he hints at a book nearly ready for publication in which he will treat also of this subject; and only a year after this he writes to Arrighetti that he has in hand a treatise on the resistance of solids.

But the work was given definite form by Galileo during his enforced residence at Siena: in these five months spent quietly with the Archbishop he himself writes that he has completed “a treatise on a new branch of mechanics full of interesting and useful ideas”; so that a few months later he was able to send word to Micanzio that the “work was ready”; as soon as his friends learned of this, they urged its publication. It was, however, no easy matter to print the work of a man already condemned by the Holy Office: and since Galileo could not hope to print it either in Florence or in Rome, he turned to the faithful Micanzio asking him to find out whether this would be possible in Venice, from whence he had received offers to print the Dialogue on the Principal Systems, as soon as the news had reached there that he was encountering difficulties. At first everything went smoothly; so that Galileo commenced sending to Micanzio some of the manuscript which was received by the latter with an enthusiasm in which he was second to none of the warmest admirers of the great philosopher. But when Micanzio consulted the Inquisitor, he received the answer that there was an express order prohibiting the printing or reprinting of any work of Galileo, either in Venice or in any other place, nullo excepto.

As soon as Galileo received this discouraging news he began to look with more favor upon offers which had come to him from Germany where his friend, and perhaps also his scholar, Giovanni Battista Pieroni, was in the service of the Emperor, as military engineer; consequently Galileo gave to Prince Mattia de’ Medici who was just leaving for Germany the first two Dialogues to be handed to Pieroni who was undecided whether to publish them at Vienna or Prague or at some place in Moravia; in the meantime, however, he had obtained permission to print both at Vienna and at Olmütz. But Galileo recognized danger at every point within reach of the long arm of the Court of Rome; hence, availing himself of the opportunity offered by the arrival of Louis Elzevir in Italy in 1636, also of the friendship between the latter and Micanzio, not to mention a visit at Arcetri, he decided to abandon all other plans and entrust to the Dutch publisher the printing of his new work the manuscript of which, although not complete, Elzevir took with him on his return home.

In the course of the year 1637, the printing was finished, and at the beginning of the following year there was lacking only the index, the title-page and the dedication. This last had, through the good offices of Diodati, been offered to the Count of Noailles, a former scholar of Galileo at Padua, and since 1634 ambassador of France at Rome, a man who did much to alleviate the distressing consequences of the celebrated trial; and the offer was gratefully accepted. The phrasing of the dedication deserves brief comment. Since Galileo was aware, on the one hand, of the prohibition against the printing of his works and since, on the other hand, he did not wish to irritate the Court of Rome from whose hands he was always hoping for complete freedom, he pretends in the dedicatory letter (where, probably through excess of caution, he gives only main outlines) that he had nothing to do with the printing of his book, asserting that he will never again publish any of his researches, and will at most distribute here and there a manuscript copy. He even expresses great surprise that his new Dialogues have fallen into the hands of the Elzevirs and were soon to be published; so that, having been asked to write a dedication, he could think of no man more worthy who could also on this occasion defend him against his enemies.

As to the title which reads: Discourses and Mathematical Demonstrations concerning Two New Sciences pertaining to Mechanics and Local Motions, this only is known, namely, that the title is not the one which Galileo had devised and suggested; in fact he protested against the publishers taking the liberty of changing it and substituting “a low and common title for the noble and dignified one carried upon the title-page.”

In reprinting this work in the National Edition, I have followed the Leyden text of 1638 faithfully but not slavishly, because I wished to utilize the large amount of manuscript material which has come down to us, for the purpose of correcting a considerable number of errors in this first edition, and also for the sake of inserting certain additions desired by the author himself. In the Leyden Edition, the four Dialogues are followed by an “Appendix containing some theorems and their proofs, dealing with centers of gravity of solid bodies, written by the same Author at an earlier date,” which has no immediate connection with the subjects treated in the Dialogues; these theorems were found by Galileo, as he tells us, “at the age of twenty-two and after two years study of geometry” and were here inserted only to save them from oblivion.

But it was not the intention of Galileo that the Dialogues on the New Sciences should contain only the four Days and the above-mentioned appendix which constitute the Leyden Edition; while, on the one hand, the Elzevirs were hastening the printing and striving to complete it at the earliest possible date, Galileo, on the other hand, kept on speaking of another Day, besides the four, thus embarrassing and perplexing the printers. From the correspondence which went on between author and publisher, it appears that this Fifth Day was to have treated “of the force of percussion and the use of the catenary”; but as the typographical work approached completion, the printer became anxious for the book to issue from the press without further delay; and thus it came to pass that the Discorsi e Dimostrazioni appeared containing only the four Days and the Appendix, in spite of the fact that in April, 1638, Galileo had plunged more deeply than ever “into the profound question of percussion” and “had almost reached a complete solution.”

The “New Sciences” now appear in an edition following the text which I, after the most careful and devoted study, determined upon for the National Edition. It appears also in that language in which, above all others, I have desired to see it. In this translation, the last and ripest work of the great philosopher makes its first appearance in the New World: if toward this important result I may hope to have contributed in some measure I shall feel amply rewarded for having given to this field of research the best years of my life. 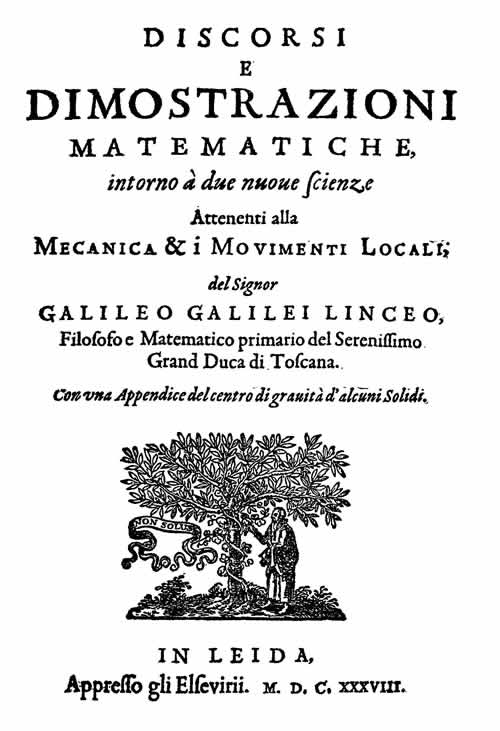