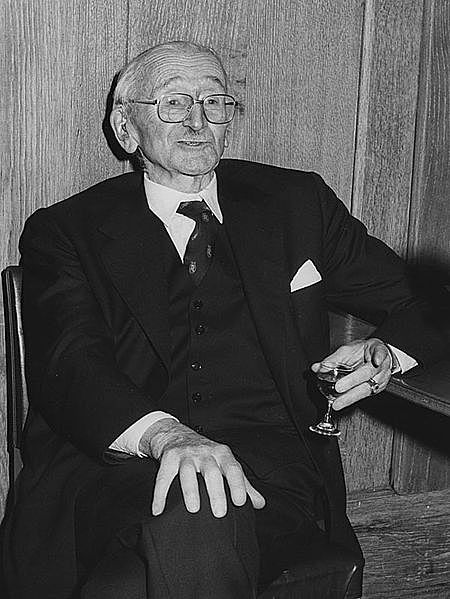 This month’s featured birthday anniversary is the Austrian economist and political philosopher Friedrich Hayek, often abbreviated as F.A.Hayek, one of the chief architects of what is called the Austrian School Economics, and one of the preeminent economists of the twentieth century.

Hayek was born in Vienna to August von Hayek and Felicitas von Juraschek. He was the eldest of three brothers. His father was a medical doctor and a well-known amateur botanist, and his mother came from a family of wealthy land-owners. His grandfathers on both sides of his family were noted scholars in the life-sciences. His family’s circumstances were very comfortable, owing largely to his mother’s wealth. Young Friedrich was a precocious child who learned to read at an early age and exhibited a lively curiosity. Bored at school, however, he was a poor student and often scored at the bottom of his class. As a teenager he volunteered for service in the Austro-Hungarian army in 1917 and saw action on the Italian Front, an experience that permanently damaged his hearing, leading to deafness in his left ear (he often jokingly noted that Karl Marx was deaf in his right ear). Though he had initially planned to study biology, in later years, Hayek said that his experience in the war motivated him to study economics in the hope of finding the path to a more prosperous and peaceful world. After the war he returned to Vienna and entered the University of Vienna, studying law and economics with the goal of going into the diplomatic service. He never lost his interest in biology and the environment, however, and in later years offered to lend his name in support of the efforts of organizations such as the World Wildlife Fund and the National Audubon Society.

While he was initially attracted to socialism, Hayek soon became disillusioned with socialist theory, a development hastened and deepened by his reading of Ludwig von Mises’ Socialism (published in 1922). Sometime soon after that he joined Mises’ seminar at the University of Vienna along with such future luminaries as Fritz Machlup and Alfred Schutz. Upon his graduation with degrees in Law and Politics, Mises helped Hayek set up the Austrian Institute for Business Cycle Research. In 1929 he was appointed lecturer in economics at the University of Vienna, a post he held until 1931. In the meantime, in 1926, he married Helen Berta Maria von Fritsch (1901-1960), who was a secretary in Mises’ office. Together they had two children: Laurence, who became a well-known botanist, and Christine, an entomologist with the British Museum of Natural History.

During the 1920s and 1930s, building on the economic insights of Carl Menger, Mises, and others, he gained an international reputation, helped by the publication in 1929 of his Monetary Theory and the Trade Cycle. The previous year, he had met and befriended John Maynard Keynes, with whom he would have a long-standing debate about money and monetary theory. In 1931, the British economist Lionel Robbins invited Hayek to give a series of lectures at the London School of Economics, which made such an impression that he was offered the position of Professor of Economic Science that same year. In 1938 he became a British subject. During these years, besides his on-going debates with Keynes, Hayek further developed the ideas that became known as the Austrian Business Cycle Theory, as well as work (begun by Mises) on what is called the “Calculation Debate.”

During World War II (much of which he spent in Cambridge with Keynes), Hayek became increasingly interested in social and political questions, and began work on a series of essays that were eventually published (in 1952) as The Counter-Revolution of Science. He also wrote what is probably his most famous book, The Road to Serfdom (1944). With the war drawing to a close, he feared that the victory over National Socialism would be a pyrrhic one if the Western Allies persisted in their growing penchant for economic planning. He argued that efforts by governments to meddle in the workings of the free market economy would eventually end in “serfdom,” a centrally planned, tyrannical political and economic system. These same concerns were the impetus behind the organization, in 1947, of the Mont Pelerin Society, of which he became the first president. Hayek and the original 39 members founded the Society to foster and strengthen the ideas of a free society that they believed had been largely forgotten during the traumatic years of the war. In 1954, Hayek published Capitalism and the Historians, based on some of the first academic papers presented at the Society’s meetings.

In 1950 he left Great Britain for the USA to take a position at the University of Chicago. That same year he divorced his wife and married his cousin, Helene Bitterlich (1900-1996), with whom he had long been close. In 1962, after three decades of work in Great Britain and the United States, Hayek accepted an invitation to come to the University of Freiburg, where he was Professor of Economic Policy until his retirement in 1967. He received numerous awards and honorary doctorates from universities all over the world, and in 1971 the University of Vienna, his alma mater, made him an honorary senator. Shortly thereafter, in 1974, he was awarded (with Gunnar Myrdal) the Nobel Prize in Economics. Hayek was the first free market economist to win the Prize.

During this same time, despite his deteriorating health, Hayek was writing his magisterial three volume study Law, Legislation and Liberty, the first volume of which he published the same year he won the Nobel Prize. He eventually completed the third volume in 1979, whereupon he embarked on another project, The Fatal Conceit (published in 1988).

His health by this time was very poor and the last years of his life were spent at his home in Freiburg, where he was cared for by his daughter Helene. He died on March 23, 1992.

While the importance of Hayek’s intellectual contributions can hardly be overestimated, people who knew him were also deeply impressed by his pleasant and friendly personality. His fellow economist and contemporary Joseph Schumpeter noted that Hayek was in fact too polite, and not nearly hard enough on his intellectual opponents. Hayek himself said that ultimately it is personal qualities such as kindness, a sense of humor, modesty, and respect for others that make a liberal society possible.