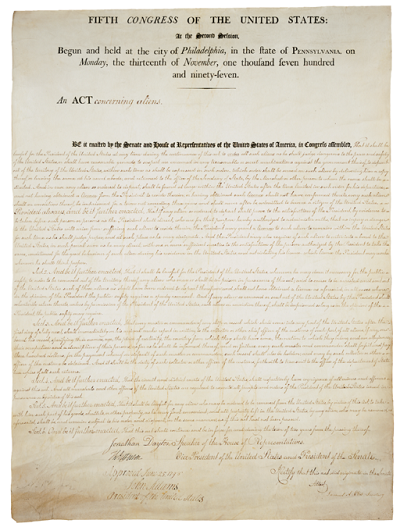 The Alien and Sedition Acts

Sect. 3. And be it further enacted, That every master or commander of any ship or vessel which shall come into any port of the United States after the first day of July next shall, immediately on his arrival, make report in writing to the collector or other chief officer of the customs of such port, of all aliens, if any on board his vessel, specifying their names, age, the place of nativity, the country from which they shall have come, the nation to which they belong and owe allegiance, their occupation, and a description of their persons, as far as he shall be informed thereof, and on failure, every such master and commander shall forfeit and pay three hundred dollars, for the payment whereof, on default of such master or commander, such vessel shall also be holden, and may by such collector or other officer of the customs be detained. And it shall be the duty of such collector or other officer of the customs, forthwith to transmit to the office of the Department of State true copies of all such returns.

Sect. 5. And be it further enacted, That it shall be lawful for any alien who may be ordered to be removed from the United States, by virtue of this act, to take with him such part of his goods, chattels, or other property, as he may find convenient; and all property left in the United States, by any alien who may be removed as aforesaid, shall be and remain subject to his order and disposal, in the same manner as if this act had not been passed.

Sect. 6. And be it further enacted, That this act shall continue and be in force for and during the term of two years from the passing thereof.

Section 1. Be it enacted by the Senate and House of Representatives of the United States of America, in Congress assembled, That if any persons shall unlawfully combine or conspire together, with intent to oppose any measure or measures of the government of the United States, which are or shall be directed by proper authority, or to impede the operation of any law of the United States, or to intimidate or prevent any person holding a place or office in or under the government of the United States, from undertaking, performing, or executing his trust or duty: and if any person or persons, with intent as aforesaid, shall counsel, advise, or attempt to procure any insurrection, riot, unlawful assembly, or combination, whether such conspiracy, threatening, counsel, advice, or attempt shall have the proposed effect or not, he or they shall be deemed guilty of a high misdemeanour, and on conviction before any court of the United States having jurisdiction thereof, shall be punished by a fine not exceeding five thousand dollars, and by imprisonment during a term of not less than six months, nor exceeding five years; and further, at the discretion of the court, may be holden to find sureties for his good behaviour, in such sum, and for such time, as the said court may direct.

Sect. 3. And be it further enacted and declared, That if any person shall be prosecuted under this act for the writing or publishing any libel aforesaid, it shall be lawful for the defendant, upon the trial of the cause, to give in evidence in his defence, the truth of the matter contained in the publication charged as a libel. And the jury who shall try the cause shall have a right to determine the law and the fact, under the direction of the court, as in other cases.

Sect. 4. And be it further enacted, That this act shall continue and be in force until the third day of March, one thousand eight hundred and one, and no longer: Provided, That the expiration of the act shall not prevent or defeat a prosecution and punishment of any offence against the law, during the time it shall be in force.