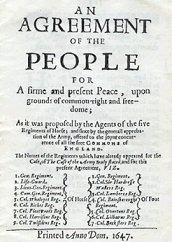 81. The Agreement of the People.

An Agreement of the People of England, and the places therewith incorporated, for a secure and present peace, upon grounds of common right, freedom and safety.

Having, by our late labours and hazards, made it appear to the world at how high a rate we value our just freedom, and God having so far owned our cause as to deliver the enemies thereof into our hands, we do now hold ourselves bound, in mutual duty to each other, to take the best care we can for the future, to avoid both the danger of returning into a slavish condition and the chargeable remedy of another war: for as it cannot be imagined that so many of our countrymen would have opposed us in this quarrel if they had understood their own good, so may we hopefully promise to ourselves, that when our common rights and liberties shall be cleared, their endeavours will be disappointed that seek to make themselves our masters. Since therefore our former oppressions and not-yet-ended troubles have been occasioned either by want of frequent national meetings in council, or by the undue or unequal constitution thereof, or by rendering those meetings ineffectual, we are fully agreed and resolved, God willing, to provide, that hereafter our Representatives be neither left to an uncertainty for times nor be unequally constituted, nor made useless to the ends for which they are intended. In order whereunto we declare and agree,

First, that, to prevent the many inconveniences apparently arising from the long continuance of the same persons in supreme authority, this present Parliament end and dissolve upon, or before, the last day of April, 1649.

Secondly, that the people of England (being at this day very unequally distributed by counties, cities, and boroughs, for the election of their Representatives) be indifferently proportioned; and, to this end, that the Representative of the whole nation shall consist of 400 persons, or not above; and in each county, and the places thereto subjoined, there shall be chosen, to make up the said Representative at all times, the several numbers here mentioned, viz.

Provided, that the first or second Representative may, if they see cause, assign the remainder of the 400 representers, not hereby assigned, or so many of them as they shall see cause for, unto such counties as shall appear in this present distribution to have less than their due proportion. Provided also, that where any city or borough, to which one representer or more is assigned, shall be found in a due proportion not competent alone to elect a representer, or the number of representers assigned thereto, it is left to future Representatives to assign such a number of parishes or villages near adjoining to such city or borough, to be joined therewith in the elections, or may make the same proportionable.

Fourthly. That 150 members at least be always present in each sitting of the Representative, at the passing of any law or doing of any act whereby the people are to be bound; saving, that the number of sixty may make a House for debates or resolutions that are preparatory thereunto.

Sixthly. That in each interval between biennial Representatives, the Council of State, in case of imminent danger or extreme necessity, may summon a Representative to be forthwith chosen, and to meet; so as the Session thereof continue not above eighty days; and so as it dissolve at least fifty days before the appointed time for the next biennial Representative; and upon the fiftieth day so preceding it shall dissolve of course, if not otherwise dissolved sooner.

Seventhly. That no member of any Representative be made either receiver, treasurer, or other officer, during that employment, saving to be a member of the Council of State.

Eightly. That the Representatives have, and shall be understood to have, the supreme trust in order to the preservation and government of the whole; and that their power extend, without the consent or concurrence of any other person or persons, to the erecting and abolishing of Courts of Justice and public offices, and to the enacting, altering, repealing and declaring of laws, and the highest and final judgment, concerning all natural or civil things, but not concerning things spiritual or evangelical. Provided that, even in things natural and civil, these six particulars next following are, and shall be, understood to be excepted and reserved from our Representatives, viz. 1. We do not empower them to impress or constrain any person to serve in foreign war, either by sea or land, nor for any military service within the kingdom; save that they may take order for the forming, training, and exercising of the people in a military way, to be in readiness for resisting of foreign invasions, suppressing of sudden insurrections, or for assisting in execution of the laws; and may take order for the employing and conducting of them for those ends; provided, that, even in such cases, none be compellable to go out of the county he lives in, if he procure another to serve in his room. 2. That, after the time herein limited for the commencement of the first Representative, none of the people may be at any time questioned for any thing said or done in relation to the late wars or public differences, otherwise than in execution or pursuance of the determinations of the present House of Commons, against such as have adhered to the King, or his interest, against the people; and saving that accomptants for public moneys received, shall remain accountable for the same. 3. That no securities given, or to be given, by the public faith of the nation, nor any engagements of the public faith for satisfaction of debts and damages, shall be made void or invalid by the next or any future Representatives; except to such creditors as have, or shall have, justly forfeited the same: and saving, that the next Representative may confirm or make null, in part or in whole, all gifts of lands, moneys, offices, or otherwise, made by the present Parliament to any member or attendant of either House. 4. That, in any laws hereafter to be made, no person, by virtue of any tenure, grant, charter, patent, degree or birth, shall be privileged from subjection thereto, or from being bound thereby, as well as others. 5. That the Representative may not give judgment upon any man’s person or estate, where no law hath before provided; save only in calling to account and punishing public officers for abusing or failing in their trust. 6. That no Representative may in any wise render up, or give, or take away, any of the foundations of common right, liberty, and safety contained in this Agreement, nor level men’s estates, destroy property, or make all things common; and that, in all matters of such fundamental concernment, there shall be a liberty to particular members of the said Representatives to enter their dissents from the major vote.

Ninthly. Concerning religion, we agree as followeth:—1. It is intended that the Christian Religion be held forth and recommended as the public profession in this nation, which we desire may, by the grace of God, be reformed to the greatest purity in doctrine, worship and discipline, according to the Word of God; the instructing the people thereunto in a public way, so it be not compulsive; as also the maintaining of able teachers for that end, and for the confutation or discovering of heresy, error, and whatsoever is contrary to sound doctrine, is allowed to be provided for by our Representatives; the maintenance of which teachers may be out of a public treasury, and, we desire, not by tithes: provided, that Popery or Prelacy be not held forth as the public way or profession in this nation. 2. That, to the public profession so held forth, none be compelled by penalties or otherwise; but only may be endeavoured to be won by sound doctrine, and the example of a good conversation. 3. That such as profess faith in God by Jesus Christ, however differing in judgment from the doctrine, worship or discipline publicly held forth, as aforesaid, shall not be restrained from, but shall be protected in, the profession of their faith and exercise of religion, according to their consciences, in any place except such as shall be set apart for the public worship; where we provide not for them, unless they have leave, so as they abuse not this liberty to the civil injury of others, or to actual disturbance of the public peace on their parts. Nevertheless, it is not intended to be hereby provided, that this liberty shall necessarily extend to Popery or Prelacy. 4. That all laws, ordinances, statutes, and clauses in any law, statute, or ordinance to the contrary of the liberty herein provided for, in the two particulars next preceding concerning religion, be, and are hereby, repealed and made void.

Tenthly. It is agreed, that whosoever shall, by force of arms, resist the orders of the next or any future Representative (except in case where such Representative shall evidently render up, or give, or take away the foundations of common right, liberty, and safety, contained in this Agreement), he shall forthwith, after his or their such resistance, lose the benefit and protection of the laws, and shall be punishable with death, as an enemy and traitor to the nation. Of the things expressed in this Agreement: the certain ending of this Parliament, as in the first Article; the equal or proportionable distribution of the number of the representers to be elected, as in the second; the certainty of the people’s meeting to elect for Representatives biennial, and their freedom in elections; with the certainty of meeting, sitting and ending of Representatives so elected, which are provided for in the third Article; as also the qualifications of persons to elect or be elected, as in the first and second particulars under the third Article; also the certainty of a number for passing a law or preparatory debates, provided for in the fourth Article; the matter of the fifth Article, concerning the Council of State, and of the sixth, concerning the calling, sitting and ending of Representatives extraordinary; also the power of Representatives to be, as in the eighth Article, and limited, as in the six reserves next following the same: likewise the second and third Particulars under the ninth Article concerning religion, and the whole matter of the tenth Article; all these we do account and declare to be fundamental to our common right, liberty, and safety: and therefore do both agree thereunto, and resolve to maintain the same, as God shall enable us. The rest of the matters in this Agreement we account to be useful and good for the public; and the particular circumstances of numbers, times, and places, expressed in the several Articles, we account not fundamental; but we find them necessary to be here determined, for the making the Agreement certain and practicable, and do hold these most convenient that are here set down; and therefore do positively agree thereunto. By the appointment of his Excellency the Lord-General and his General Council of Officers.

[1 ] For the Agreement of the People as originally drawn up in October, 1647, see No. 74. It is here printed with the subsequent modifications, as presented to the House of Commons on January 20. The petition which accompanied it (Old Parl. Hist. xviii. 516) was dated January 15, and that may therefore be taken as the date when the Agreement received the final approbation of the Council of the Officers.