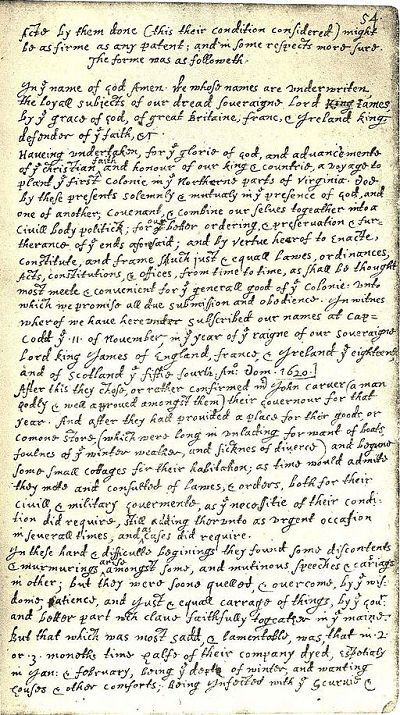 3 [Agreement Between the Settlers at New Plymouth] (The Mayflower Compact)

The complete text, with original spelling, is taken from the John Carter Brown Library copy of Nathaniel Morton’s New Englands Memoriall (Cambridge [Mass.], 1669); the library has the oldest surviving reprinting of the document. The original document disappeared sometime during the seventeenth century.

Also known as “The Plymouth Combination,” the Compact was usually referred to by Plymouth inhabitants as “The Combination” and not until 1793 was it termed the “Mayflower Compact,” when it was reprinted for the first time outside of Massachusetts by a historian in New York. The historical context surrounding its writing, as well as an analysis of its contents, can be found in Harry M. Ward, Statism in Plymouth Colony (Port Washington, N.Y.: Kennikat Press, 1973); in Willmoore Kendall and George M. Carey, The Basic Symbols of the American Political Tradition (Baton Rouge: Louisiana State University Press, 1972); and in Donald S. Lutz, The Origins of American Constitutionalism (Baton Rouge: Louisiana State University Press, 1988). Unlike colonies further south such as Virginia, Maryland, Pennsylvania, and the Carolinas where the presence of some settlers of higher social rank produced a natural, legitimate governing class, New England was settled by men of “the middling sort.” In place of a government composed of men of “standing and reputation,” the Pilgrims and other New England settlers resorted to formal agreements, signed by all males, as the basis for legitimate government. For this reason, while southern colonies moved gradually in the same direction, New England settlements immediately formed under what we now recognize as constitutional government based on popular consent. The Mayflower Compact is the oldest surviving compact based on popular consent; but see also documents 5, 7, 11, 12, 19, 21, 23, and 32–38.

[The Plymouth Combination, or The Mayflower Compact]

IN the Name of God, Amen. We whose Names are under-written, the Loyal Subjects of our dread Soveraign Lord King James, by the grace of God of Great Britain, France and Ireland, King, Defendorof the Faith &c. Having undertaken for the glory of God, and advancement of the Christian Faith, and the Honour of our K[i]ng and Countrey, a Voyage to plant the first Colony in the Northern parts of Virginia; Do by these Presents, solemnly and mutually, in the presence of God and one another, Covenant and Combine our selves together into a Civil Body Politick, for our better ordering and preservation, and furtherance of the ends aforesaid: and by virtue hereof do enact, constitute, and frame, such just and equal Laws, Ordinances, Acts, Constitutions and Officers, from time to time, as shall be thought most meet and convenient for the general good of the Colony; unto which we promise all due submission and obedience. In witness whereof we have hereunto subscribed our Names at Cape Cod, the eleventh of November, in the Reign of our Soveraign Lord King James, of England, France and Ireland the eighteenth, and of Scotland the fifty fourth, Anno Dom. 1620.