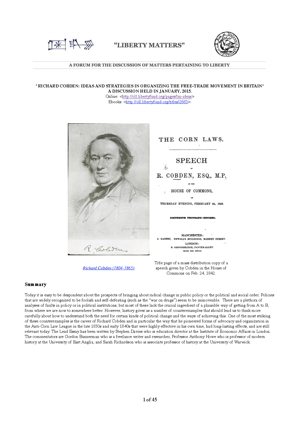 This volume is a collection of the “Liberty Matters” online discussion forums which took place during 2015. There are seven which cover the following topics: Richard Cobden: Ideas and Strategies in Organizing the Free-Trade Movement in Britain; On the Spread of (Classical) Liberal Ideas; Assessing Böhm-Bawerk’s Contribution to Economics after a Hundred Years; Magna Carta after 800 Years: From liber homo to modern freedom; Reassessing the Political Economy of John Stuart Mill; Anthony de Jasay and the Political Economy of the State; and Montesquieu on Liberty and Sumptuary Law. The Forums are also available individually in HTML and a variety of ebook formats.