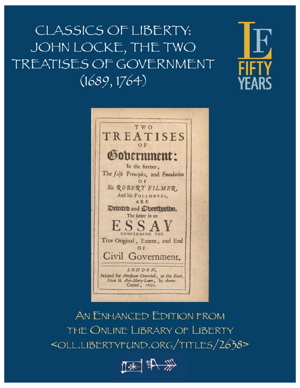 The Enhanced Edition of The Two Treatises of Government (1689)

This edition of Locke’s Two Treatises combines the text from the Online Library of Liberty with supplementary material about Locke’s political theory written by modern scholars, most notably the “Liberty Matters” online discussion forum on Locke’s theory of property. These essays discuss his theory of property and natural rights and refer to specific passages in the text. The edition of the Two Treatises is Hollis’s from 1764 which was widely circulated in the American colonies prior to the Revolution. It is hoped that the combination of the two will assist those who wish to deepen their knowledge of this important political thinker.