The Progress of English Liberty 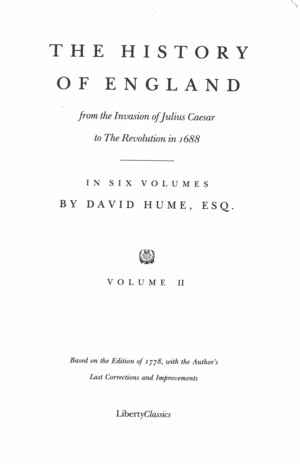 Towards the end of writing his 6 volume history of England Hume surveyed the entire sweep of English constitutional development. We include this aside as a separate essay here.

His investigations now permitted him confidently to reject the Whig view that England has enjoyed a single constitution whose original plan was laid by the ancient Saxons. In fact, Hume argued, English history brings to light a succession of diverse constitutional arrangements which led, in ways that were largely unplanned and unanticipated, to “the most perfect and most accurate system of liberty that was ever found compatible with government.”

The original can be found here: David Hume, The History of England from the Invasion of Julius Caesar to the Revolution in 1688, Foreword by William B. Todd, 6 vols. (Indianapolis: Liberty Fund 1983). Vol. 2. Chapter: XXIII: EDWARD V AND RICHARD III.