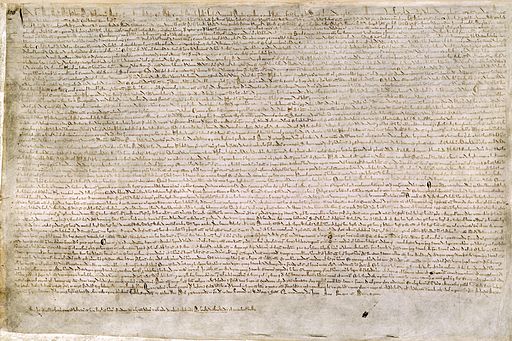 After losing the Battle of Bouvines in northern France in 1214 King John (1166-1216) was forced by his rebellious nobles to recognise a long list of liberties which the monarchy henceforth had to respect. These became known as the “traditional rights of Englishmen”:

We have also granted to all freemen of our kingdom, for us and our heirs forever, all the underwritten liberties, to be had and held by them and their heirs, of us and our heirs forever… No scutage (tax) nor aid shall be imposed on our kingdom, unless by common counsel of our kingdom … And the city of London shall have all its ancient liberties and free customs, as well by land as by water … No freeman shall be taken or [and] imprisoned or disseised or exiled or in any way destroyed, nor will we go upon him nor send upon him, except by the lawful judgment of his peers or [and] by the law of the land. … To no one will we sell, to no one will we refuse or delay, right or justice. … All merchants shall have safe and secure exit from England, and entry to England, with the right to tarry there and to move about as well by land as by water, for buying and selling by the ancient and right customs, quit from all evil tolls …

The document known as the “Magna Carta” (also known as the Great Charter of Liberties) was a milestone in the creation of formal limits which were placed on the power of the monarch to do certain things. Magna Carta achieved nearly mythical status among supporters of limited constitutional government in the 17th and 18th centuries and it was used by jurists like Sir Edward Coke and radicals like John Lilburne in their struggles against the crown in the 1620s and 1640s in England, as well as by many colonists in North America when they were drawing up their local charters. The quotation lists some of the more important clauses such as the perpetuity of a freeman’s rights, the idea of no taxation without consent, the right to freedom of trade for cities like London, and rights to “due process” of the law such as jury trials and prompt trials. The impact of the great charter is partly myth and partly true. It is true that these concession were wrung out of the King by a band of disgruntled noblemen who wished to preserve their privileges not to make statements about universal rights; it is true that the language referred to the rights of the “freemen” of the kingdom but this only applied to the small percentage of tenant farmers who had freehold title to their farms (perhaps 10% of the population) not to all the peasants; and so on. However, over time it became of powerful symbol of individual rights which were held by all Englishmen (not women) and these ideas were vital in the establishment of constitutional governments throughout the English speaking world. 2015 will mark the 800th anniversary of the signing of the Great Charter.