The Code of Hammurabi (also Hammurapi), the most complete and perfect extant collection of Babylonian laws, was developed during the reign of Hammurabi (r. 1792-1750 B.C.) of the first dynasty of Babylon. The code consists of Hammurabi’s legal decisions, which were collected toward the end of his reign and inscribed on a diorite stele set up in Babylon’s Temple of Marduk, a temple named for the national god of Babylon. The 282 case laws include economic provisions (prices, tariffs, trade, and commercial regulations), family law (marriage and divorce), as well as provisions dealing with criminal law (assault, theft) and civil law (slavery, debt). Penalties for breaking the laws varied according to the status of the offender and the circumstances of the offense. The code survives only in the Semitic Akkadian tongue, but it is clear that it was also meant to apply to the non-Semitic Sumerians, representing an integration of the traditions of both peoples. Hammurabi’s Code is the most complete record of ancient law in existence. 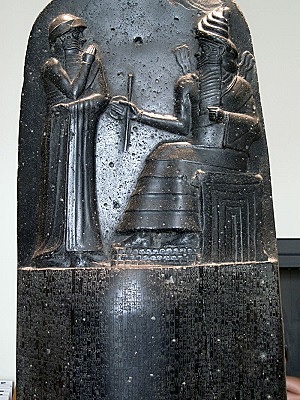 Edition of the Code

Works about the Code